After more than four decades, the pastor of one of America’s largest and most influential churches is ready to step down.

And he appointed a young couple to replace him.

“This afternoon at our all-staff meeting held at the Lake Forest campus, I was finally able to publicly announce that we have found God’s couple to lead our congregation, and they have agreed to come !” Saddleback Church pastor Rick Warren told his Orange County, Calif., congregation in an email on Thursday.

Today’s email included a link to a video featuring Warren and his wife, Kay, and Andy and Stacie Wood of Echo Church in San Jose, California. Andy Wood, 40, is currently Echo’s lead pastor, while Stacie Wood is a teaching pastor. They will have the same roles at Saddleback.

Founded in 2008 as South Bay Church, Echo now has four campuses and attracts about 3,000 people to weekly services. Like Saddleback, Echo has ties to the Southern Baptist Convention, although no church uses the word Baptist in his name. A graduate of Southwestern Baptist Theological Seminary, Andy Wood has also worked with church planters through the SBC’s North American Mission Board.

“Kay and I believe in this couple so much,” Warren said in a statement announcing the transition. “We love them so much and are confident that God has groomed and chosen them to take over and run the next leg of the Saddleback Marathon.”

The search for a new pastor began last summer, in part because of Warren’s ongoing health issues. He told the church last year that he had spinal myoclonus, which causes tremors and blurred vision, and it has gotten worse in recent years.

Saddleback leaders spoke with about 100 potential candidates before settling on Wood, who preached at the church earlier this year.

Pastor Andy Wood of Echo Church has been chosen as Rick Warren’s successor at Saddleback.

Wood plans to step down as pastor of Echo Church in late June and will move to Orange County to begin the transition. The first step will be a conversation between the Warrens and the Woods over Father’s Day weekend. In August, the couple will begin attending Saddleback.

The church will celebrate Warren’s ministry during the first weekends of September. Wood’s first official day as pastor will be September 12.

“For decades we have admired and respected Pastors Rick and Kay Warren and their work through the Purpose Driven Church model has been essential,” Wood said in a statement. “We have been so blessed by their friendship, and after months of prayer and seeking guidance from others, we believe God has called us together to serve at Saddleback Church.”

In the email sent to the Saddleback congregation, Warren said he and Kay were filled with love and gratitude for the church and quoted a New Testament verse about fighting the good fight and ending the race.

“Now is the time for us to pass the torch to a new generation who will love, lead and pastor our family of churches for decades to come,” he wrote.

In May 2021, Saddleback made headlines after ordaining three female staff members as pastors — a controversial step for Southern Baptists. The SBC Statement of Faith limits the office of pastor “to men qualified by Scripture.” But Southern Baptists disagree on whether this applies only to the senior pastor of the church or whether it prohibits any woman from holding the title of pastor. They also disagree on whether women can preach at a Sunday service.

At the SBC’s annual meeting, Saddleback was reported to the Credentials Committee, which is responsible for deciding whether or not a church is in “friendly cooperation” with the denomination. Although some churches have left the SBC after appointing female pastors, the denomination has never officially suppressed a church for having a female pastor.

Filling Warren’s shoes will be a difficult task, as Saddleback’s current pastor has long been one of the most influential Christian leaders in the country, shaping everything from how pastors dress to how they organize and create new churches.

Scott Thumma, director of the Hartford Institute for Religion Research at Hartford International University, said megachurch transitions are often a challenge. The higher the profile of a mega-church pastor, the harder it is to replace him.

While mega-churches can continue after a founding pastor leaves, it’s not an easy transition.

“It won’t be the same place without Warren,” Thumma said.

Wood’s success, Thumma said, will depend in part on Warren’s ability to abandon the church and allow a new pastor to take over and chart his own course. But Thumma observed that Warren had taken steps in the past to allow others to lead at Saddleback. He doesn’t preach every Sunday and was what Thumma called “a thoughtful leader.”

Thumma said the Warrens have been a positive role model of what pastors can be during a difficult time for church leaders. They avoided scandal and were honest about their struggles. For the most part, they have avoided the culture wars and partisan squabbles that have caused many to lose faith in religious leaders. 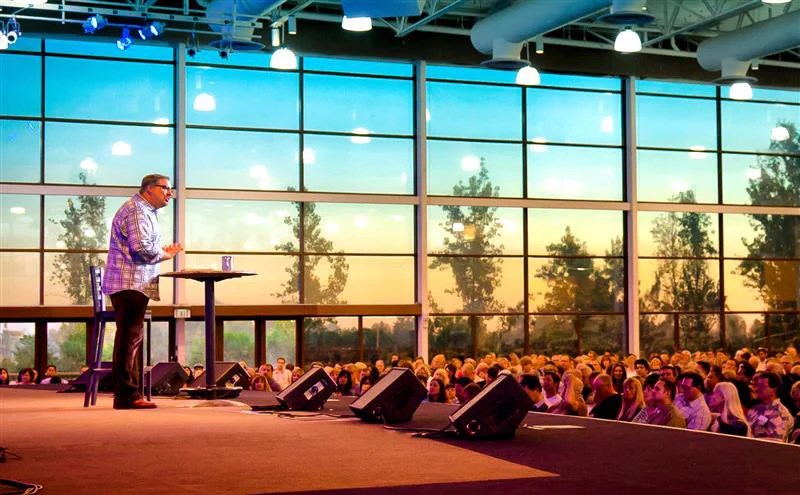 Image: Courtesy of A. Larry Ross

Warren’s retirement will mark the end of a distinguished career in ministry.

After graduating from Southwestern Baptist Theological Seminary in December 1979, Warren and his wife, along with a 4-month-old baby, packed their bags and moved to the Saddleback Valley in Orange County, California, then one of the fastest growing communities. in the USA.

In his 1995 book, “The Purpose Driven Church”, Warren described studying demographics and census data in the summer of 1979, searching for the right place to start a new church – only stopping to call his wife. a few times a day to see if she had given birth.

One day, Warren said, he had a revelation after seeing the data on Saddleback Valley, saying that God had spoken to him and told him to plant a church there.

“It didn’t matter that I had no money, no members, and never even saw the place,” he wrote. “From that moment on, our destination was a settled question. God had shown me where he was going to make waves, and I was going to have the ride of my life.

The church was launched on Easter Sunday 1980, with a crowd of about 200 people in a rented space at Laguna Hills High School in Orange County, and has never looked back.

By 1992, the church had 6,000 members and purchased a 74-acre site that the church still calls home. The church is now one of the largest congregations in the country, attracting more than 23,000 congregants gathered in more than a dozen locations.

The church, though Southern Baptist, has downplayed the battles of the Culture War and eschewed traditional church culture for a more laid-back, as you are, approach to worship — one that newcomers could easily adopt. . At first, Warren was known for preaching in a Hawaiian shirt, sparking a new fashion trend among pastors.

Saddleback was also the birthplace of Celebrate Recovery, a Christian-inspired 12-step program to help people deal with their “hurts, blocks, and habits.” The program has been adopted by tens of thousands of churches across the country.

Warren became a household name in 2002 with the publication of The goal-oriented life, an uncontrollable bestseller. The book’s success allowed him to “reverse tithe” by donating most of his earnings. In the mid-2000s, prompted largely by Kay, Warren and the church became active in the response to the global AIDS pandemic and in the fight against poverty abroad, particularly in war-torn Rwanda. . Later he also wrote a popular diet book called The Daniel Projectdriven by his own weight loss.

Although conservative, Warren avoided some of the partisanship associated with evangelical pastors. In 2008, he hosted a presidential candidates’ forum with Barack Obama and John McCain, then rivals for the presidency, and later gave the invocation at Obama’s first inauguration.

In 2013, Warren’s youngest son, Matthew, died aged 27 after years of battling mental illness. The family has shared their loss openly and, in the years since Matthew’s death, have become advocates for mental health and helping those affected by suicide.

From his early days at Saddleback, Warren hoped to spend his entire ministry in the church. One of his heroes as a young pastor was WA Criswell, who spent five decades pastoring First Baptist Church in Dallas, and Warren hoped to emulate Criswell’s tenure.

“That was my promise to God and to you, God’s people,” Warren said last summer. “It was my way of saying, ‘You don’t have to worry about me leaving when times get tough for you. I am here for the duration. I will give my life to this church. I will stay with you,” and I kept the promise.