By Carly Stern For Dailymail.com

A pair from Minnesota gave birth to sons 90 minutes apart – in delivery rooms right next to each other.

In April, Ashley Carruth and Brittany Schille both discovered they were pregnant and had due dates within days of each other.

But when Ashley gave birth on the day Brittany was due to be induced, the two were able to share the experience and give birth to cousins ​​having the exact same birthday. 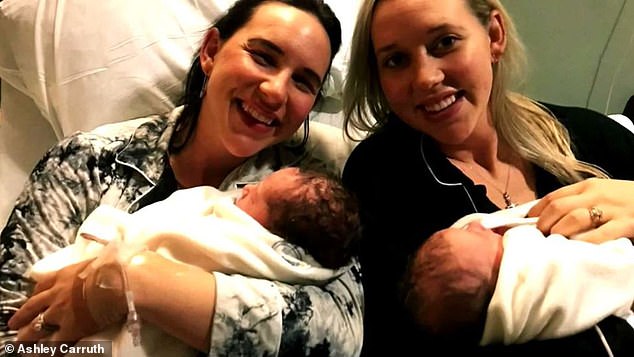 What timing! Minnesota pair gave birth to sons 90 minutes apart – in delivery rooms right next to each other

Ashley and Brittany live about 20 minutes apart in the Twin Cities area and were able to enjoy their pregnancy together.

The shared experience was particularly welcome during the pandemic.

“Even for baby showers and things like that, it’s not normal and it’s not what you expect in your head, so it’s hard, but it was so heartwarming to have my sister to live, “Brittany told the local CBS station, WCCO.

Ashley started labor at 2 a.m. on December 14 – the same day Brittany turned out to be induced.

Brittany said: “She texted me at 2:30 in the morning saying ‘I’m having contractions, maybe I’ll meet you at the hospital. “‘

Both were admitted to M Health Fairview Ridges Hospital in Burnsville, where they were given delivery rooms right next to each other.

“I got to say hello to her and see her, and we both just looked at each other sweetly,” Ashley said. CNN. “It’s like those times that you think of when you’re a little girl that are happening in such a special way, so it was very, very emotional for both of us.” 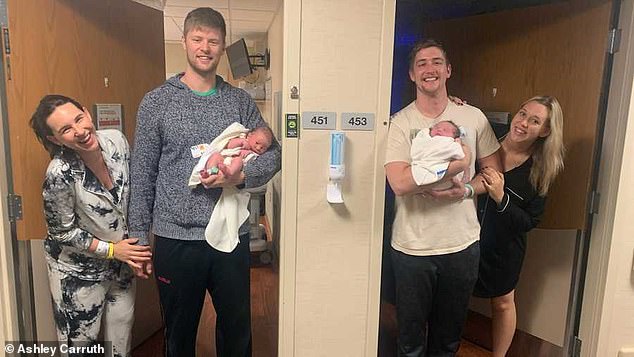 Twins – sort of! When Ashley Carruth (left) went into labor on the day Brittany Schille (right) was due to be induced, the two were able to share the experience

“We were texting each other, ‘What are you dilated to, have you ever had an epidural? “” Brittany added.

They even shared doctors and nurses, and Ashley said they all laughed and joked about the unlikely scenario.

Ashley ended up giving birth first, with her and her husband John welcoming a son, Cassius John Carruth.

Brittany was next, and she and her husband Joe also had a son, Zander Paul Schille, who was named after Brittany and Ashley’s father, Paul, who died of cancer in 2016.

Ashley said the coincidence of their side-by-side pregnancies and births made it seem like their father was sending them a sign that he was watching.

“It just seemed like something he would do,” Ashley said. “We really felt the presence of God and His presence throughout the experience of the labor and delivery hospital stay which could have been really scary and really weird with COVID, and no visitors, and no families. able to come apart from your spouse or partner. ”